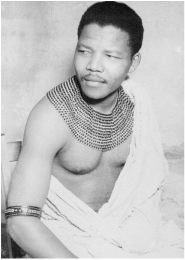 Rolihlahla Nelson Mandela was born on the eighteenth of July of 1918 in Mvezo. Mvezo is a small village on the banks of the Mbashe River. Mandela was born with the name Rolihlahla, which literally means "trouble-maker". His father, Gadla Henry Mphakanyiswa, was the chief of the Thembu people by both blood and custom. Galda Henry Mphakanyiswa had four wives and had a total of thirteen children in total, four boys and nine girls. Mandela was a son of his third wife, Nosekeni Fanny, she was known as the "Right Hand wife". The wives each were titled -- the Great Wife, the Right Hand wife (Mandela's mother), the Left Hand wife, and the wife of the Iqadi of support house. Mandela was the oldest of the right hand house but the youngest of the four boys. Today, all three of the eldest sons have passed. Mandela's father soon got terminated from the rule, he lost both his fortune and his pride but this lead to Mandela's happiest childhood memories. His mother moved to a slightly larger village slightly north of Mvezo named Qunu.

The village of Quno was slightly less grande but it is then that Mandela spent the happiest years of his boyhood. There was no more than a few hundred people in the village.  There were no roads and the land itself was owned by the state, at this time many people did not own there own land but were paying a form of taxes to the government to farm on the land. Quno was a village mainly of women and children and many people did not know how to read or write. Mandela required the majority of his knowledge through observations. Mandela was like any other kid in this village, he played as often as he could while being respectful to his father. Mandela says in a video speaking about his childhood "... I like that the atmosphere is rural atmosphere of my home village and the boys would never going to school and the way the people talked ...". The school house Mandela went to when he was seven years old was a small building in his village that consisted of a single room. Most of the children that Mandela knew mainly only had one type of clothing which was a blanket wrapped around them at one shoulder and was pinned at the waste as shown in the image above. The day before Mandela was to begin school his father took him aside and told him that he must be dressed properly for school. Mandela's father took a pair of his trousers and cut them at the knee.His father told him to try them on, which he did. To this day Mandela said, "I have never owned a suit I was prouder to wear than my father's cut-off pants." The education Mandela was receiving was a British education, meaning that everything that Mandela was learning in school was British ideas, British culture, British institutions, they were all automatically assumed to be superior.

During the two years of school his father started coming to his hut less often. Then one day his father came by Mandela's mother's hut earlier than expected with some type of lung disease. His father then asked his youngest wife to go get his tobacco. The wife resisted but then agreed, his father smoked for about an hour and then died with his cigar still lit. His father passed away in 1927 or when Mandela was nine years old. Mandela was saddened by his father's death because even though his mother was the center of his existence, he defined himself through his father. Mandela did not expect his fathers passing to change his life so greatly and after a period of mourning his mother told him to pack his things and that they would be leaving Qunu. Mandela did not ask where he was going or why, he just agreed. Mandela later found out that he was being sent to Clarkebury boarding school.

After the funeral of Mandela's father the chief of Clarkebury village named Jongintaba Dalindyebo offered to become Mandela's guardian during his time at the boarding school. Mandela did well in school because he was very self disciplined and he was reinforced by his Aunt Phathiwe, who lived in the Great Place and scrutinized his homework. The Great Place was the royal residence of chief Jongintaba. In school Mandela studied English, Xhosa, History, and Geography. The boarding school was a mission statement of the Methodist Church, they wore modern clothing consisting of suits for the boys and dresses, skirts, and high necked blouses for the girls. After exceeding in his studies he became a leader of his school, in 1940 he stood up for change and joined a student boycott in the school. The principal of the school found out that the school leader was going against their rules and gave Mandela an option, be expelled or leave the boycott, he choose expulsion. Jongintaba was furious at him and told Mandela to go apologize and try to allow them to let him back in. Instead Mandela decided to escape for Jongintaba and the school and go off to Johannesburg, to lead a new adult life, which will eventually lead to the Mandela we praise and glorify for his good doing and revolting.
Powered by